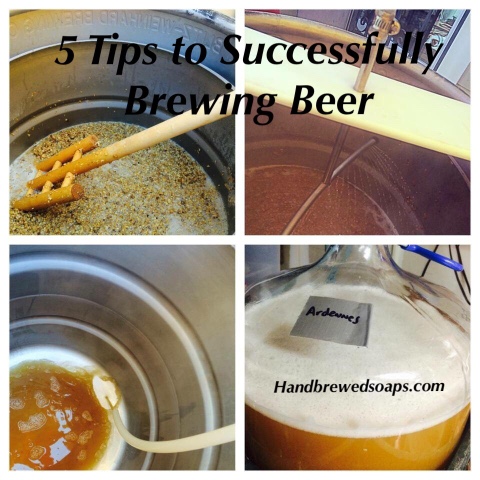 Today is "Learning to Homebrew Day!" Yes, this is an official holiday in the beer world!! In honor of this awesome holiday, we have presented 5 of the most helpful tips we wish we knew while learning how to make beer.


1. The key to a successful brewed beer is in the sanitation. You can make the most yummy beer, but if you forget to sanitize, say goodbye to your 'liquid gold.' This happened to us once in the early years. We had sanitized EVERYTHING ( so we had thought.) We bottled our beer, came back two weeks later, and saw floaty-s in the beer. It wasn't just one bottle, it was all of them.  We thought it was yeast that got into the bottles during transfer. To make sure it was ok to drink, we took a bottle to Brewmaster, a local brew supply store, and they confirmed it as bacteria. We had to ditch the beer. We figured out we didn't sanitize the bottles good enough. Something must have been at the bottom of the bottles that we missed while cleaning them. Lesson learned!

2. Don't drink so much beer that you boil over.  You have to drink beer while you brew, it's the law of home brewing! But just watch yourself on brew day! We had a brew day where four different brewers (two had won awards for their beer, the others were just learning) came over, with their equipment and supplies. One of the award winners kept saying through out the day about not boiling over. You can lose a lot of beer when it happens and then your recipe is off. (There are work arounds, it just plain sucks when it happens!) This advice quickly turned into bragging rites, with the more beer he drank. Soon his warnings turned into jokes, "How can you tell a beginner brewer from an expert brewer? If he boils over!!!!!" And guess who was the only one to boil over that day? Yep, the "expert"of the bunch! He will never live this story down!!!

3. Don't forget to transfer your beer! Always write down your transfer/ bottling schedule on a calendar. We forgot to transfer our beer into secondary in a timely manner ( 2 weeks is the norm, we transferred at 6 weeks!) As a result, the water in the airlock got so low that air got into the carboy and bacteria started to grow. We had to dump 10 gallons of beer.

4. If you're brewing in California, or a place that is experiencing a drought, make sure to capture your water as you are cooling it with your wort chiller. We run our water into barrels so we can later use the water for hydrating our plants.

5. It's ok to start with an extract for for first time to get the hang of brewing. There is a big learning curve when starting to brew. Start slow and small. A kit is a great way to learn to process and jargon, while successfully creating  a drinkable beer!

So Happy "Learn To Homebrew Day!" We hope you find these tips helpful. We would love to hear any tips you have!  And feel free to learn more about brewing with our article, "Making Beer."

Posted by Handbrewedsoaps at 7:59 AM

Handbrewedsoaps
Oakland, California, United States
I'm a third generation "Oaklander”; have two wonderful girls; and a really cool husband! I've been a classroom teacher in OUSD for 8 years. Now, I work on the Oakland MILE Project, a project that researches the impact music has on student learning. I also run my dream business. Handbrewed Soaps™ was born when my husband and I came up with the idea to “marry our passions” together, his brewing beer and mine hand-brewing soap! I started making cold process soap 4 years ago out of the need to provide my family with a better alternative to commercial soaps that extracted the oils out of our skin and replace them with harmful chemicals that irritated us. I wanted a soap that would clean without added chemicals and without taking away the essential oils in my skin. Through the years, I have experimented with herbs, fruits, and vegetables from my backyard. Then I made soap out of my husband’s beer. I was hooked, and Handbrewed Soaps™ was born. This blog is about what I “brew-up”: an idea, a craft/home project, an adventures. I can’t guarantee everything will be a success, but it will definitely be entertaining. I also encourage you to check out my store at handbrewedsoaps.com.